How Foreign Languages Can Give You the Professional Edge

Join the webinar at this link:   http://ufat.adobeconnect.com/r6qhxdxwxc9/

Students are generally unaware of the opportunities and of the training and education necessary.  Education is necessary to increase awareness and to empower students to develop the necessary foreign language skills.

Kathleen Stein Smith participated as the French language facilitator at the “Many Languages One World” Essay Contest and Global Youth Forum, sponsored by ELS and the UN Academic Impact in June 2014 and spoke at the American Association of Teachers of French (AATF) annual convention in July 2014.

She is the author of The U.S. Foreign Language Deficit and Our Economic and National Security: A Bibliographic Essay on the U.S. Language Paradox, and of the U.S. Foreign Language Deficit and How It Can Be Effectively Addressed in a Globalized World:  A Bibliographic Essay, both Edwin Mellen Press, 2013, several recent articles that have appeared in Language Magazine, FDU Magazine, Babel Magazine, Multilingual Magazine, and the Journal of Languages for Specific Purposes,  and “Language Matters,” at kathleensteinsmith.wordpress.com.

She has taught foreign languages at the college and university level, the middle school and high school level, and to adult community school learners.  She has also served as the first Public Library Director Bilingual in English and Spanish in the State of New Jersey.

She received her Ph.D in Interdisciplinary Studies from the Union Institute & University, Cincinnati, Ohio. 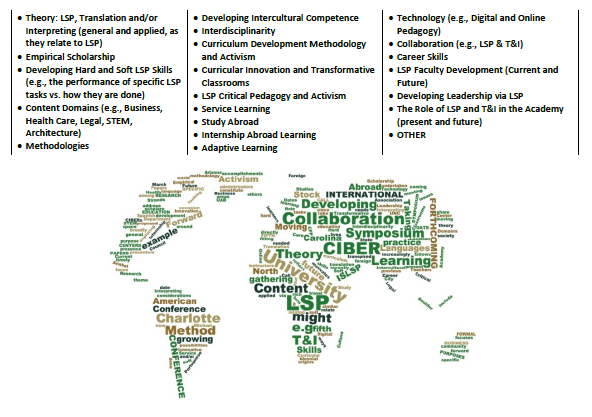 March 5–7, 2020 Fifth International Symposium on Language for Specific Purposes (ISLSP) & Centers for International Business Education and Research (CIBER) Language Conference at the University of Charlotte… “Taking Stock and Moving Forward:[...]
May
14
Thu
9:00 am 2nd International Conference of ... @ Rimske Terme Thermal Resort
2nd International Conference of ... @ Rimske Terme Thermal Resort
May 14 @ 9:00 am – May 16 @ 5:00 pm
Languages for Specific Purposes: Opportunities and Challenges of Teaching and Research We are calling for proposals for the 2 nd international conference of the Slovene Association of LSP Teachers, which will take place in Rimske[...]
May
15
Fri
8:00 am VII CIEFE Congreso Internacion...
VII CIEFE Congreso Internacion...
May 15 @ 8:00 am – May 16 @ 6:00 pm
¡Participa en la VII edición del CIEFE! Con el fin de darle continuidad a la línea de formación establecida en el ámbito de la enseñanza de español con fines específicos, tenemos el placer de anunciar[...]
May
22
Fri
8:30 am (RE)Considering the Foundation P... @ University of Nis
(RE)Considering the Foundation P... @ University of Nis
May 22 @ 8:30 am – May 24 @ 5:00 pm
4th International ESP Conference The 4th edition of the traditional ESP conference of the University of Niš, Serbia, will aim at researching the foundation theory and practice of ESP and LSP, as well as rethinking[...]
View Calendar