Don’t get excited! I’m being facetious when it comes to flash fluency in a foreign language.

Yesterday, while watching the Super Bowl, I decided to start German lessons on Duolingo. Tim Ferriss, of THE 4-HOUR WORKWEEK fame, claims it’s the best online language learning method he has ever used and he’s studied 10+ languages. I like Tim Ferriss’ books so I decided to give Duolingo a shot.

During the four hours of the Super Bowl, I experienced an acid flashback taking me back to my high school days grinding through a Grammar-Translation method textbook used in Father Harold Ostdiek’s French 1 and 2 class in 1969. With Duolingo I translated over 100 sentences and phrases from English to German and German to English in those 4 hours. There was, however, a smudge of dictation to ease the pain.

After those four hours of intense work, albeit with one eye on the game, Duolingo declared that I was 22% fluent in German! In only four hours!

Let’s take a look at some examples of my fluency. “The fly likes the cow” and “I do not know the bird” were among my favorite expressions in German. Imagine my ability to order food, to purchase clothing or cheer at Bayern Munich Fussball match using these expressions! Or meeting a young lady! Imagine the following scenario using only Duolingo expressions:

Not bad for 22% fluency. At this pace, I will become a native speaker of German in 16 hours with more sophisticated pick-up lines!

And yet Tim Ferriss claims he can teach me to speak Japanese in 5 days using his 12-point system.

I can’t wait to learn Japanese, but I need to finish Duolingo German first! 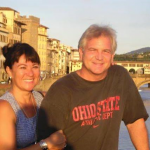 View all posts by Mary Risner →