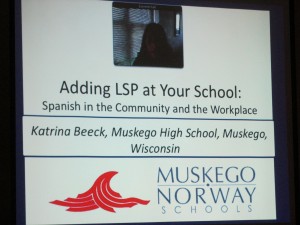 Preparing Students for Jobs of the Future

Presentations from the panel at the Second International Symposium  of Languages for Specific Purposes (ISLSP-2014) on Meeting Industry Needs Through LSP Innovation in US Schools held at University of Colorado at Boulder, USA.  NOBLE Project/K-12 Initiatives

The Twenty-First Century Leader: Social Artist, Spiritual Visionary, and Cultural Innovator
An article which looks at the new roles and mindset for leaders in the twenty-first century.
By: Karakas, F. 2007. Global Business and Organizational  Excellence, March/April 2007, 44-50.

Making American Students Globally Competent
A podcast with the Asia Society’s Vice President, a society that is “trying to change the reputation of America’s education system.”
By: Tulenko, John. 2010, February 24. Education Week Video.

Essential Skills for the 21st Century Workplace
By: The American Management Association

Multipliers: How the Best Leaders Make Everyone Smarter
By: McKinney, Michael. 2010, June 29.

Seth Godin on the Tribes We Lead
What gives people the power to lead and make change?
By: Goden, Seth. 2009, February. TED Talk.

The Art and Science of Leadership
A comprehensive collection of articles and activities for developing leadership skills and knowledge.
By: Big Dg and Little God’s Bowl of Biscuits.

What does it mean to “use the language to investigate, explain, and reflect on” cultural practices, products, and perspectives? How are literacy skills integrated in the World-Readiness Standards?

“Language Roadmaps to Build 21st Century Skills”
An initiative proposed improve  foreign language education in U.S. schools and to build partnerships with the business community. This project was funded by the U.S. Congress and co- sponsored by the U.S. Department of Commerce and the U.S. Department of Labor and was under  the auspices of the National Security Education Program.